What the Chancellor failed to address in the Budget 2018

Chris Thompson takes a sideways look at what the country and SMEs needed from the Budget.

Are politicians disconnected from economic reality? Both main parties appear to be engaged in a war of promises. The Chancellor declared an end to austerity and a commitment to more funding for the NHS. But how can austerity be over when the UK government still spends more than it earns in tax receipts?

Philip Hammond abandoned the plan of his predecessor, George Osborne, to eliminate the deficit by 2025. So it's difficult to see us reducing the debt pile any time soon. Given current anti-capitalist sentiment, a gargantuan tax code along with our pending exit from the EU, now may have been as good a time as any to set out a radical agenda to tackle these fundamental issues in the Budget 2018.

Here are some ideas to consider:

We mentioned this back in the Spring Budget of 2017, the UK tax code is both monumental and incredibly complex. Shockingly, Dominic Frisby's diagram below shows that combining the Chilcot Report, Leo Tolstoy's War and Peace, the Bible and the complete works of Shakespeare comes to less than half the words used in our tax code. That's right, not even 50%!

Since 1997 the tax code has trebled in size. There have been no instances of reducing it. Hence we have the 10m words we see today. This is hugely problematic because there's so much of it and it's very difficult to understand much of the regulation. The likelihood is few people can act on it confident of being compliant.

When you have a situation where legislation is created to seal up the cracks of previous legislation, surely this is an indication of a chronic problem? How can entrepreneurs and owner managers scale-up their organisations, a key driver of economic growth, if they have such a vast swathe of tax matters occupying their time, money, and attention?

How can HMRC implement this colossus effectively? Furthermore the costs of administering this system have soared over the years. It explains why so many law abiding citizens accidentally make mistakes when declaring their income in their tax returns - it's a minefield. 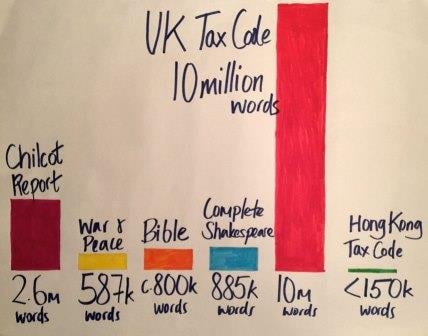 To start with, tax reliefs and breaks need review; many can be got rid of for the purpose of simplification. Many taxes need removing and how about merging income tax and national insurance as a good starting point? Another solution offered in a report by the 2020 Tax Commission, that could have been announced and then implemented post Brexit, is to treat all earnings in the UK as generated by either:

This does away with taxing organisations as these are described as not really existing, being legal constructs that simply organise labour and capital. Thus only individuals exist to pay tax and that does away with taxing corporations and their profits which can be easily manipulated. Instead all taxation could be based on cash flows when they are distributed to employees and investors.

Why business and capitalism could be the solution, not the issue

It's unsurprising given the causes of the last financial crisis, the unaffordability of the housing market and the wealth divide between top and bottom income earners that capitalism is firmly under the microscope. However, look up the history notes and we see that a return to mass government intervention, as witnessed by the labour disputes of 1970's, didn't do a lot for the economy.

Perhaps the problem isn't capitalism but how it's been implemented of late. Productivity in the UK remains low. This is key because greater output per hour worked is the way we become wealthier so that living standards rise and governments can invest in public services from the resulting tax take.

The Financial Times points out that the UK has experienced a slump in productivity growth since the financial crisis. We are near the bottom of the G7 league table on this measure and one of the key reasons cited is the number of low skilled workers in the UK economy.

There has been a significant rise in the supply of cheap labour in the UK since 2004. If you have a lot of supply, especially if it's low skilled, this may drive the price down. Low wage workers create low wage jobs so the argument goes. Why for example, should employers adopt new technologies that compliment skilled staff when there's an abundance of low skilled labour available?

Businesses have thus chosen recruitment over business investment reports the Bank of England. Therefore lower value jobs can create a downward pressure on wages. The prospect of Brexit however, is already resulting in labour shortages meaning businesses are beginning to turn to investment in labour saving technologies.

The Chancellor could have communicated a more pro business agenda and capitalism as the solution. The boost to the annual investment allowance was welcome but perhaps he could have gone further? How about some policies to help promote the uptake of apprentices as well as training and upskilling workers, surely this is a necessity?

Reducing the amount of red tape and paperwork employers have to go through on these matters would have been a start. Employee share ownership has been mentioned by both parties of late. That's not a bad idea for sharing the spoils with employees although some of the ideas mooted may not appeal to all in the private sector. A reassertion and promotion of schemes such as The Enterprise Management Incentive (EMI) wouldn't have gone amiss.

There's little to report on the above points. You can find a summary of the announcements on our blog in, was the Budget 2018 a missed opportunity? Tax receipts were better for this financial year than expected giving the Chancellor a windfall. His subsequent tax and spending announcements mean he's already consumed all of this unexpected money.

The reason for not tackling the big issues are obvious; no parliamentary majority due to being in a coalition with the DUP along with Brexit negotiations still on-going. However, Britain needs to be preparing for a post-Brexit world in which there is likely to be greater sovereign control. The beginnings of a radical budget would have been an ideal starting point. If not now, when?