How to NOT take on the Three Peaks Challenge

Chris Thompson recounts how 17 members of Wellers took on the task of climbing three mountains in under 24 hours.

On Friday 1 July a team from Wellers undertook the Three Peaks Challenge as part of the firm's CSR policy. It proved to be quite an experience for all that took part (especially the drivers!) and we will all have learnt plenty from the challenges we faced. In this blog post we chart exactly what happened and why unfortunately this is very much a case of unfinished business.

Who would have though that we’d have such changeable weather in early July? Usually when Wimbledon starts the sun begins to shine. As if the Three Peaks Challenge isn’t hard enough, when you throw variable to dire weather conditions into the mix then the already considerable task becomes that little bit more difficult.

Below is the weather forecast that confronted us for the times we’d begin our ascent in each location. Our plan was to meet at Glasgow airport on the Friday morning. Some had gone up the night before and others caught a very early flight from Heathrow. From there it was a three and a half hour drive in two mini busses to Ben Nevis. 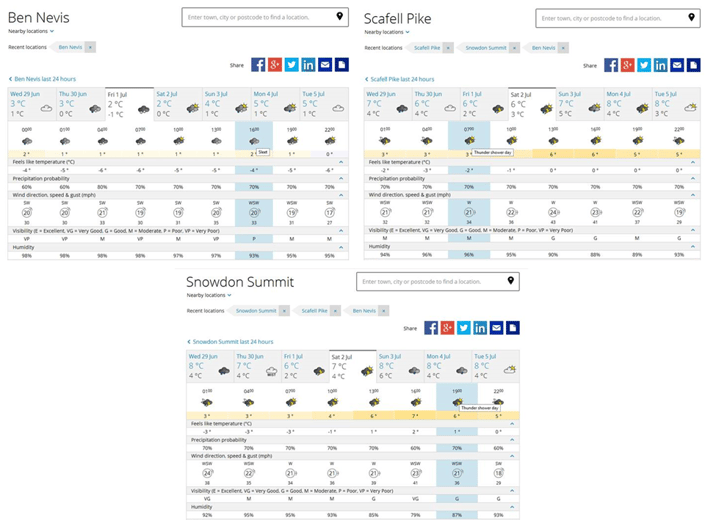 Having stocked up on essential food and drink items for the climb ahead, we gathered at the base of the mountain. Our climb began at 3pm and in typical British fashion the heavens opened up just as we set off only to then break into sunshine 10 minutes later. It was the theme for most of the climb. Sunny one minute and then pouring rain and high winds the next.

Ben Nevis is perhaps the most gruelling of the three peaks.  It’s the highest mountain in the British Isles standing at 1,346 metres (4,414 ft). That’s a fair old distance and the climb seemed endless at times. It’s a mixture of rocks that form steps followed by gravel paths along with the odd mini waterfall to cross. Add in the rain and things became a bit slippery.

We’d started as a group but quite quickly spread out. Therein lies the first secret to the three peaks, you’re only as fast as your last team members to descend! The views were dramatic, when we could see them because as the pictures demonstrate there was a lot of cloud and mist. We’d be buttoned up with rain proofs on one minute and then taking the layers off the next as the sun emerged and things warmed up.

At three quarter distance the route breaks into a series of zig zags to the top. Psychologically, it's quite deceiving after a while. You think you’re there but actually you still have a distance to go. Suddenly those aches and pains become more prominent as your mind exalts, “surely we’re there now!?”

It’s a case of getting your head down and keeping going. The spoils await at the top or so we thought! Sadly the peak was covered in a cold, dark cloud and once into it we found ourselves battling sleet and a hard cold wind. Our time up there was brief.

Therein lies another secret, descending might look easier but actually it’s not. It requires more concentration as the likelihood of slipping, falling and injuring yourself is greater.

The descent showed how much we’d all spread out, some members were half way down the mountain while others weren’t even three quarters of the way up! This gap only got wider as time passed. Furthermore the extent of the rainfall became clear as we got to the bottom; areas of the path that had been clear and easy to navigate on the way up were now covered in pools of water with flooding notices erected.

Getting back to the minibuses brought home the reality of just how soaked we all were. Waterproofs are good but still many of us were drenched. For an idea of how big the gap had become those of us who were down first had the luxury of drying all our kit out under the hand dryers in the car park facilities. A total of two and a half hours separated the first and last arrival.

With the sun set and everyone packed into the minibuses it was the next leg of our journey, a drive south to the Lake District. This was our chance to get some sleep and rest. The problem is minibuses aren’t exactly comfortable or spacious and once off the motorway the roads in the national park are windy, full of hills and very bumpy - hardly inducive to a good nights rest! Many closed their eyes but very few actually managed any proper sleep.

As we arrived at Scaffel Pike our ability to complete the challenge within the timeframe looked increasingly unlikely. It had taken us longer to both tackle Ben Nevis and the drive down was affected by both weather conditions and road works. We’d planned to commence the second climb at around 4am but were only setting out at 6.30am!

Scaffel Pike is something of a different challenge to Ben Nevis. It’s steeper but not as high standing at 978 metres (3,209 ft) and there are 6 different routes. Two thirds of the mountain climb is over rocks in the form of steps, it’s like a very tricky staircase that tests your glutes and calf muscles. Again, conditions were mixed with intermittent showers.

At the half way stage our path forked into two. Because we’d naturally broken up into smaller groups going at different paces some took what at first appeared to be the easier option. They’d regret it later! My group of three took what turned out to be the easier fork (still quite challenging).

We made our way up through winds that became harsher by the minute with ever decreasing visibility. At one stage near the peak we were struggling to make out one cairn from the other. Cairns are the man made pile of rocks assembled near the top of mountains to help climbers to stick to the path. Once again, the elation of getting to the top soon turned to the need to get back down. It was very cold, visibility was poor and the wind was howling. 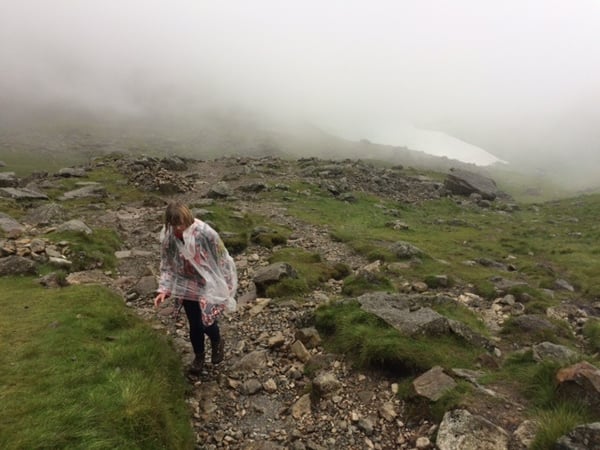 In hindsight my group’s desire to descend quickly was a significant error.  The tricky conditions meant we couldn’t see the route down - we could no longer see the next cairn. Multiple times we went backwards and forwards trying to find it but came across only steep descents and no sign of other climbers or paths.

Here’s another little secret, when faced with zero visibility (a whiteout) don’t keep moving, simply stay in the same place and wait for it to clear. In continuing to commit the error of looking, we found another path down. This was somewhat different and took us way off the original descent. Unfortunately there was no mobile signal for us to use GPS and try and get back on track.

Over three hours later and with our team concerned as to what had happened to us, we finally got to a road and discovered our exact whereabouts. We’d gone 9 miles south of our meeting point and sadly added yet more hours to our total time. Whoops! On the plus side, given how bad the weather conditions were we later discovered that our group was 3 of only 4 Wellers' people to actually make it to the summit.

Furthermore so challenging were the conditions that mountain rescue had calls out on 10 different groups at 2pm. Alas this delay then set in motion a chain of rather unfortunate events. Soon the minibuses were with us and we set out in pouring rain to the final destination, Mount Snowden.

As mentioned earlier, the Lake District is full of hills and meandering roads. Our journey also involved steep ascents and descents and very quickly this took its toll on the vehicles and their drivers.

At one point the larger of the two minibuses nearly became wedged on a bend with a cliff face on one side. It was akin to something out of the film, “The Italian Job”. Then immediately afterwards the other vehicle developed a puncture. We made it to a pub and somehow managed to get a recovery call out to replace the tyre while everyone enjoyed a well earned drink.

With a new set of boots we were off once more, way behind time wise but meandering our way through the hills when a very distinctive burning smell hit the cabin. The clutch was overheating to the point of burning. Soon power diminished and the mini bus came to halt. Given how over time we were and the severe nature of the mechanical issue, there was no choice but to abandon our mission and find alternative ways home.

All in all, an amazing experience in which everyone probably learnt a lot about themselves and each other. To finish with a final secret, you will likely be faced with unexpected challenges and adversity when undertaking the 3 peaks challenge. As this happens remember that only calm, level headed thinking will find you a viable solution.