Edward Parker FCCA explains the way to identify tax avoidance schemes and what to do if you've already committed funds to one.


In the Chancellor’s emergency budget in the summer, George Osborne explained he intended to save £3.1bn in regained tax revenue lost to schemes that allow individuals and companies to take advantage of regulations that extend tax relief. That means if you think you’ve been sold a tax advantageous scheme by an advisor then you should read on to understand:

Why tax avoidance is a very grey area

Tax avoidance is a grey area and can be seen as sitting half way between tax planning and tax evasion. We explored some interesting ideas and debates around the topic before in this post, The truth about tax avoidance? Why it might not exist? Given the government’s firm stance on the topic, you would be wise to assume it does happen.

Basically if a scheme uses tax relief in a way that wasn’t intended by parliament then it falls under the tax avoidance bracket. The issue lies in defining what was intended by parliament in the first instance as both guidance and legislation are vulnerable on some level to the interpretation of professional advisors.

Usually these kinds of investment schemes are set up as Unregulated Collective Investment Schemes (UCIS). The problem is the UK has a complex tax code with numerous tax relief schemes available. These are designed to bolster an industry and make the UK an attractive place to conduct business. When these ‘reliefs’ are used in a manner they weren’t intended for by pushing their definitions to breaking point that is when the term ‘tax avoidance’ rears its ugly head. That’s also when individuals find themselves with backdated tax bills from HMRC.

How would you know if it’s a tax avoidance scheme?

Often an obvious sign these schemes are falling into the darker shade of grey is when they rely on a venture being unsuccessful for the purpose of tax relief. This reliance on a negative outcome fits uneasily with the basic business idea that you want to make investments based on the future success of an entity.

What is HMRC doing about this?

HMRC have hit back with the extended Disclosure of Tax Avoidance Schemes Rules (DOTAS) 2004 and General Anti Abuse Rule (GAAR) 2013 as they continue to clamp down on the use of these schemes. When 2016 draws to a close HMRC estimate they would have asked 64,000 users of tax avoidance schemes for an upfront payment of tax due. By the end of tax year 2019/20 the government aims to have brought forward over £5.5 billion in payments to the Treasury. 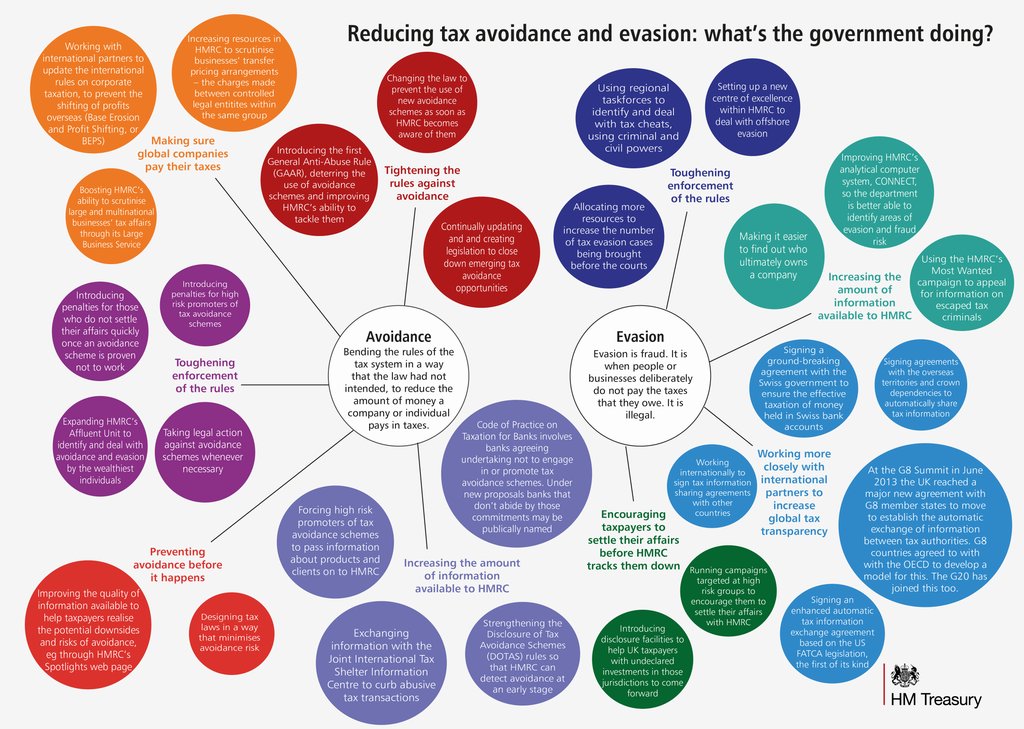 Below are examples of some of the schemes that high net worth individuals have (possibly unwittingly in some cases) partaken in. The result being they find themselves in huge debt to HMRC because of the advice from promoters who encouraged them to participate in tax strategies that have been called into legal question. Click on the image for a version you can enlarge. 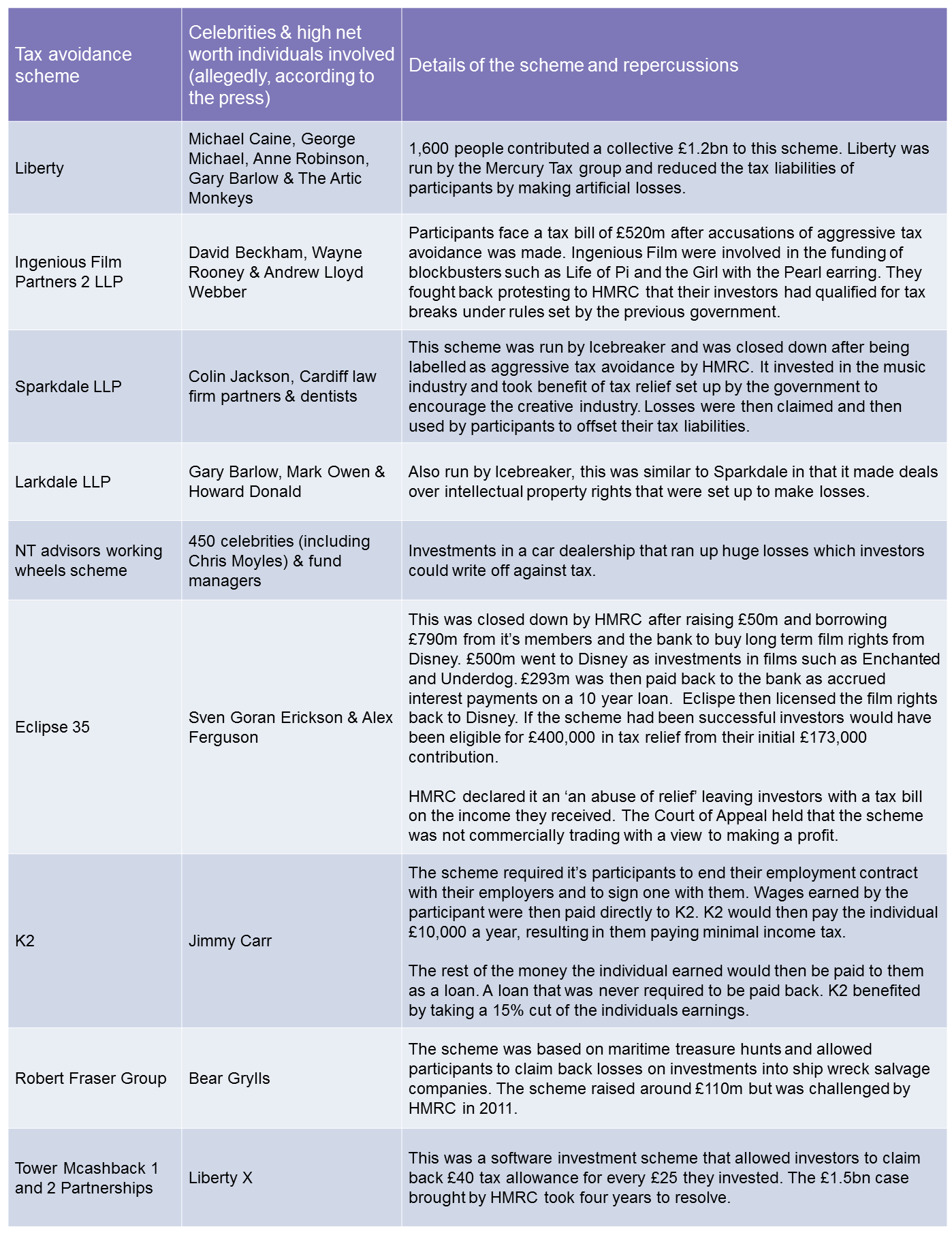 How successful have HMRC been?

Investigating these kinds of schemes and taking a harder line has already proven to be very lucrative for the Treasury. HMRC took back £29m in a First Tier Tax Tribunal case in the Summer of this year. This was against the Brain Disorders Research Limited Partnership scheme where investors claimed to spend £122m in research but in fact only spent £7m.

The partners took out two 15 year loans of £53m and invested these alongside £13m cash. The partnership then paid a company £122m to fund research into depression and ADHD. Only £7million actually made it to the research company but capital gains allowance relief was claimed on the full £122m. As the partnership was not actually trading, it was deemed that no tax relief was due.

What's the culpability of advisors who promote these schemes?

Usually the individuals who enter these schemes have been advised by a financial team of some form to do so. Advice generally comes from a range of professionals who may introduce the scheme to their clients. Often this is backed by Counsel who will have advised on the validity of the scheme or drafted documentation.

The concept however, is complex. Many professional advisors are not well versed in tax legislation. They may simply have come across an investment program for their client, read the tax advantages and seen it as a worthy opportunity. An abundance of the schemes actually made claims they were approved by HMRC. HMRC may have been notified about them as required under the rules governing investment schemes but that doesn’t mean they have been approved.

The consequence is some time down the line investors might face a potentially bankrupting tax bill. The Financial Services Compensation Scheme (FSCS) has revealed that they have so far received 150 compensation claims against advisors in relation to tax avoidance . FSCS have only recently been able to start looking into these claims as the complexity of the legality behind the investment schemes required the FSCS to get external legal advice to go ahead.

Some professionals have found themselves in a difficult position. Guidelines state they are obliged to notify clients of an investment scheme even if they are not willing to advise on it. The uncertainty around the rules was highlighted in 2013 when a high profile case at the High Court found an accountancy firm had a contractual obligation to advise clients of tax schemes yet the Iranian businessman who brought the case was still awarded damages.

However, the case was taken to the Court of Appeal where the judgment held that accountancy firms do not have a general duty to recommend sophisticated tax planning schemes to their clients [ Mehjoo v Harben Barker (a firm) & Anor [2014] EXCA Civ 358 ].

What happens if I have participated in a scheme of this nature?

HMRC’s clamp down leaves individuals and businesses who have been found to push the boundaries of tax planning too far in something of a precarious position. The revenue has the power to demand retrospective payments. This means if the scheme was entered into a number of years ago (max. 10 years) the payment required can be very large.

Since the Finance Act 2014, HMRC have been able to send out Accelerated Payment Notices (APNs) which demand payment of money owed within 90 days with no room for negotiation or appeal. Failure to do so will incur a 15% penalty. Prior to this, those being investigated did not need to pay any money until the investigation had been completed. APNs allow HMRC to require immediate payment with investigations pending. 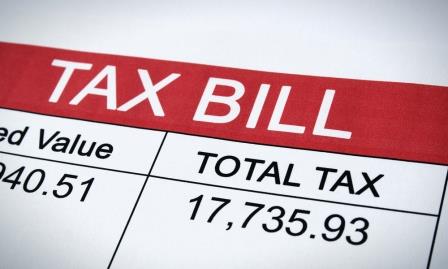 Currently due to the ‘schedule 39 rule’ HMRC are allowed to investigate income tax up to 4 years prior to the start of the investigation . However if they can prove you were ‘careless’ with your tax responsibilities this increases to 6 years. If they have evidence to suggest you ‘deliberately avoided tax this gets bumped up to 20 years.

It is often the case that people who have embarked on such schemes are likely to have invested in more than one. In order to focus on this HMRC set up the Serial Avoiders Unit which identifies and tackles such patterns of behaviour. They set up a hotline for those that have concerns that they have contributed to these schemes and want to get their tax affairs in order.

The lesson here is to make sure you seek advice from tax advisors who can ensure that you are not embarking on an investment that could leave you with a significantly higher tax bill later on. It’s imperative that advice is sought before an investment is made, as once contracts are drawn, signed and money exchanges hands it can be very difficult to extricate oneself.