Why tech start-ups should forget insane valuations & being unicorns

Ercan Demiralay FCCA & Chris Thompson discuss the billion dollar insane valuations of some tech start-ups and why this isn't a feasible end goal for entrepreneurs.

With the number of billion dollar start-ups on the rise, there has been plenty of coverage online questioning the sense behind these prices and the business models they’re being applied to. In fact a whole industry appears to have emerged around fundraising and thereby helping tech businesses achieve the coveted unicorn status.

The focus of today’s tech entrepreneurs seems to be based predominantly around raising finance and attaining lofty valuations. Many seek finance to develop product functionality and gain mass brand traction with profits coming further down the list of priorities. Being a unicorn brings huge apparent kudos to business owners and their investors - it's seen as the fast route to bring your idea and team to fruition.

Is this the right path to pursue if you’re starting out with a concept or running an early stage tech organisation?

Have the fundamental business principles of yester year changed with the advent of the internet and all the possibilities it exudes? At what point will you need to think about profitability in this process? Read on to find out more.

What is a unicorn?

If you’re not familiar with the term, unicorn refers to tech companies that have raised finance to achieve a billion dollar valuation. Much like the animal itself in Greek mythology, this used to be a very rare thing to see. That’s changed to an extent because in less than 2 years the number of unicorns has more than doubled. 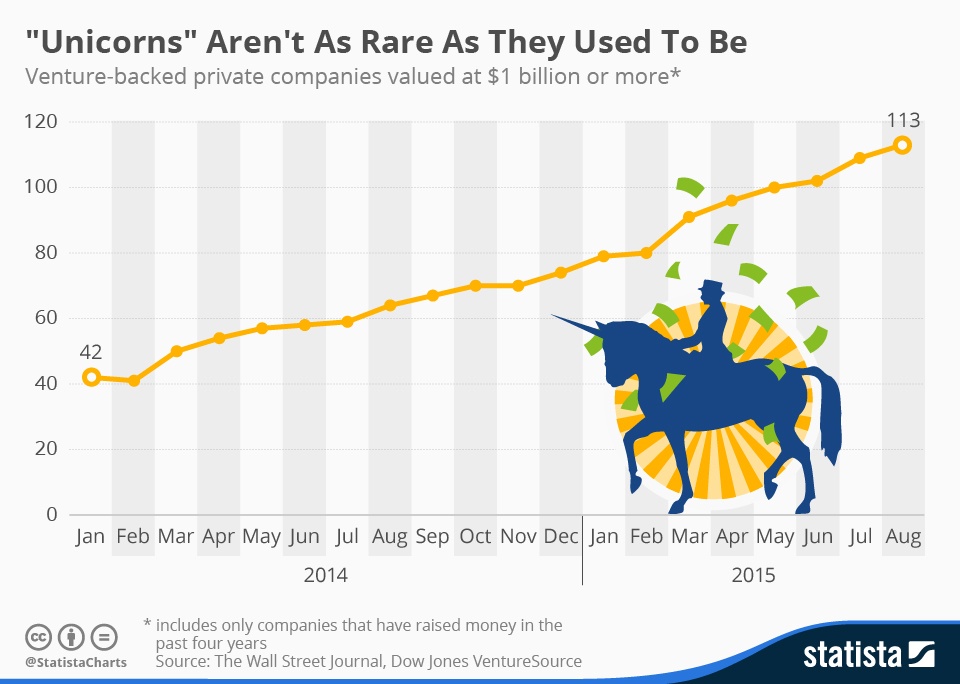 The potential business flaws of many tech start-ups and unicorns

As you can see from the graph below, Uber is the most valuable venture backed private company in the world to the sum of $51bn. What you may not know and be surprised to read, is that Uber still isn’t profitable and is said to be burning through $100m a day having raised a further $1.2bn this year. Then there’s Snapchat which is worth $16bn, yet only in 2015 (it’s fifth year in business) is the company focussing on revenue and making any money.

So, what's going on here? Unicorn valuations effectively go against many of the principles used by analysts and advisors to rate organisations equity prices. As Chris Woodcock points out in The Memo, why insane price tags on “unicorn” tech businesses aren’t justified, a valuation is traditionally a comparison (ratio) between two aspects of the business. The price earnings ratio is one example, the price sales ratio is another of many. 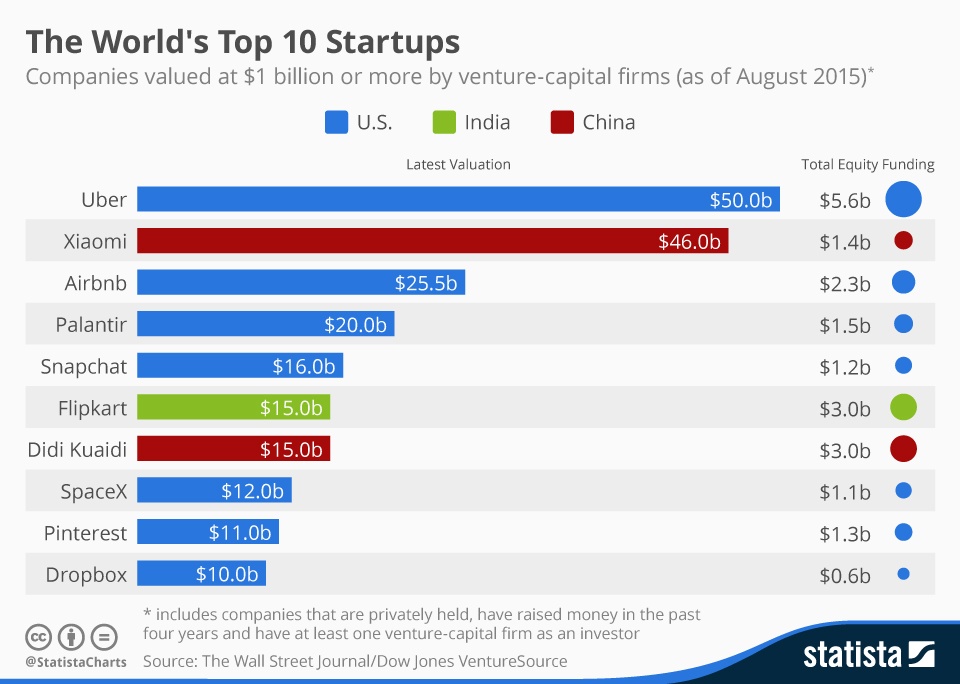 Unicorns on the other hand only appear to have a price. They don’t tend to have many, if any, solid metrics to compare against. That means there’s little to no solid evidence in the calculations that from the projections upon which their valuations are made. They are based largely on the hypothetical, a punt on possible future sales and becoming the next big thing.

From an investor perspective, that’s dangerous because it means the fundamentals of these companies are far from proven. For example, what turnover or profit are Airbnb and Flipkart making to justify their billion dollar status? If as an entrepreneur you can’t answer that then effectively you are asking people to invest in your organisation at a price that could far exceed the value of the assets of the business. That represents a lot of risk and possible down side to potentially interested parties.

For many tech companies the next step in the business journey after multiple fundraising rounds, is to either float on the stock market through an IPO (initial public offering) or sell the business to another organisation. This then allows original private investors the opportunity to cash out (at a profit) which could be particularly desirable if it’s been a few years since they took a stake in the business.

The problem that then arises is that corporate finance advisors along with the buyers and sellers of stock markets deploy traditional, tried and tested valuation techniques. Their methods of due diligence could result in either you not achieving a sale at the desired price or, new investors buying in at a lower price than existing investors if the business floats. That would then be somewhat contrary to the aim of going public.

The example of Square

Facebook is the beacon so many tech entrepreneurs look to as the model for their business strategy. However, the company lost $50bn in value a few months after listing on the NASDAQ in 2012. Then consider Square. The payments company is supposed to be typical of tech's dream ticket. Its co-founder is Jack Dorsey (CEO of Twitter), it's backed by some of Silicon Valley's most illustrious investors and 6 years after starting up it's preparing to list on the New York Stock Exchange (NYSE).

Unlike some other unicorns Square actually generates revenue, reportedly $560.6m in the first half of 2015, albeit it at a loss of $77.6m. That's where the dream ends and the harsh realities of the financial world have led to a sudden and jolting wake up call. Square's price range in terms of what it expects to sell its shares for on the exchange, is below the level of funding from the last investment round just over 12 months ago.

According to The Financial Times, the projected public valuation is $6bn but unfortunately that's nearly $2bn less than what was promised to recent investors. They're not the only ones to suffer. Square issued shares to employees at a price of $15.39 but the upcoming listing suggests a price that’s more likely to come in around $12 a share. It paints a somewhat bleak picture which becomes more complicated under the surface.

You see many of Square's investors are part of a complex ownership structure comprising of different classes of share combined with specific guarantees. This isn't anything new in business but it's reported that the number of these structured deals, as they're referred to, has jumped during the tech boom. In the latest financing round, investors paid $15.46 per share and were said to be guaranteed a 20% appreciation in the price upon listing. Their compensation if this increase fails to materialise is more shares to make up any difference. That then potentially dilutes the value for earlier investors and employees.

What tech startup entrepreneurs should really focus on

Whatever your exciting new idea or early stage business, basic business principles should still apply. Forget achieving a mega valuation or the technical functionality and capabilities you will develop, instead start out by asking yourself the following fundamental questions:

These are the items, and there are many others, that you should address in your business plan. You really need to establish and prove your concept to start with before developing anything or raising any money.

Once you have your answers, place yourself in the shoes of an investor. Is this a compelling enough story to make you part with your money and invest? If the answer is no then your business isn’t sufficiently viable. Consider the below infographic for starting out courtesy of Anna Vital of Funders and Founders. 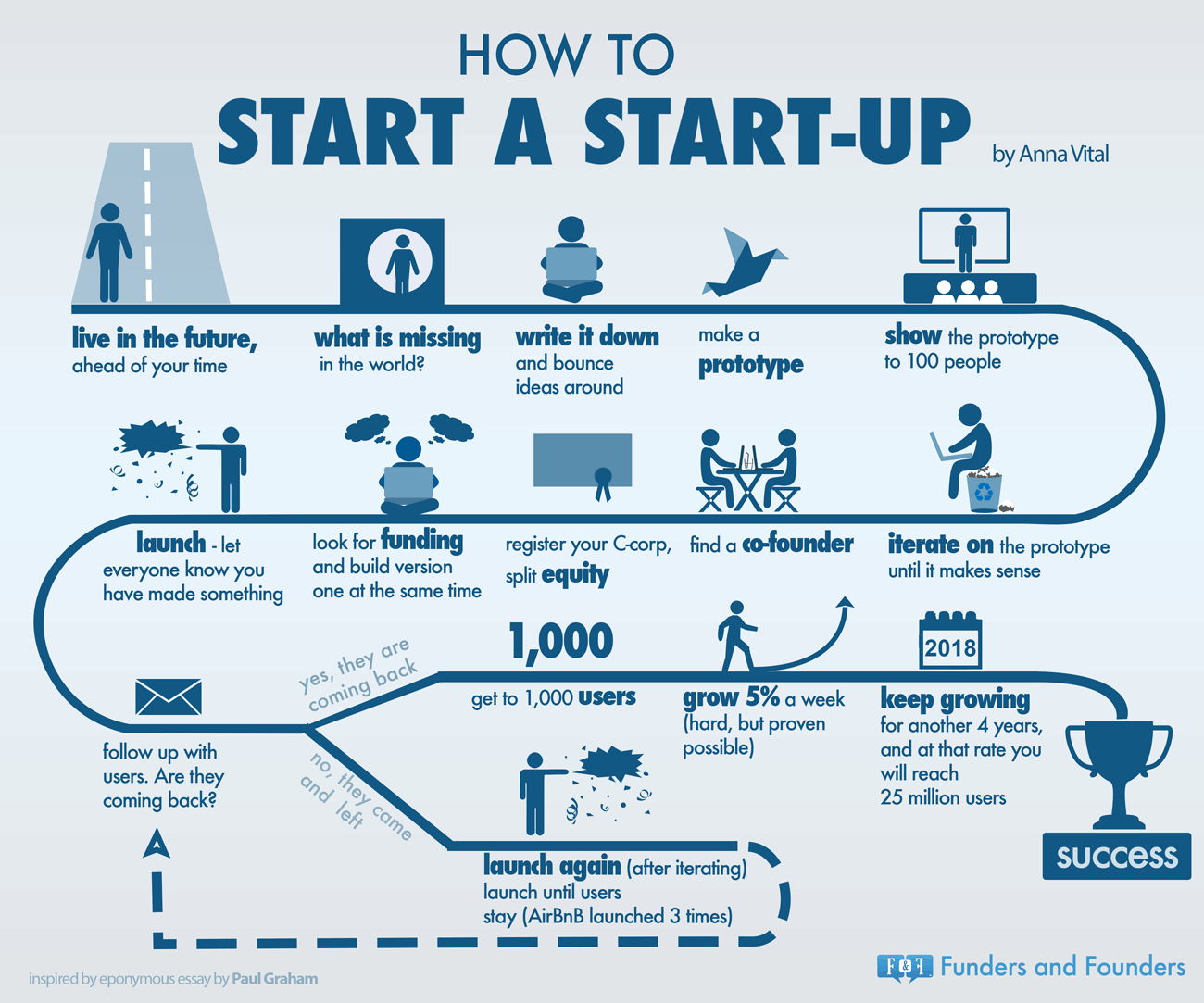 When drawing up your business plan, assess if you will need finance. What will you need it for and how much (not just some crazy amount to achieve a billion dollar valuation because that’s the latest tech trend)? Do you want lots of investors on board or could you retain control of the company via another form of finance?

You may need to break the fund raising into stages, whereby certain things are achieved off the back of each finance round. Map this out clearly which is important to any potential investor or bank who will appreciate seeing where and how their money will be spent and possibly paid back from one round to another.

Remember, any fundraising is about how you will enhance your product/service or develop the business. What will it mean to the end user, your customer? How will each fund raising round improve the product or service they enjoy and in turn how will that make the business more profitable?

The valuation that comes from raising finance will represent how well your company has performed to date and is perceived to do in the near future off historical trading. It shouldn’t be the aim but the consequence of your deep thinking, hard work, narrative, vision, dedication, sacrifice, team, luck and skill. Success should be measured in new customers won, repeat customers, customer satisfaction, turnover and profit. Everything else is merely a by-product.