How to retain staff priced out by London's exclusive property market

James Tillotson FCA explores the reasons why people are migrating from the capital, but commuting to work and what this means for businesses.

There is a growing and worrying trend emerging in some economically successful cities across the world. They’re witnessing a significant influx of global rich people who are buying up property in these locations.

Attracting wealthy people is a sign of city’s success and should help improve the well-being of others as the more wealthy people we have living in London, the more likely they are to spend some of their fortune here.

The theory goes that this then adds their new money to the capital’s economy with a trickle down effect taking place in respect of other local areas. Unfortunately, this phenomena has come with a two fold problem for London:

The result is an emigration of people, not in terms of where they work (at least initially), but where they live. It’s forced workers into the long commute and this has significant social and economic consequences. We explore what it means for you as a business owner along with your employees and how to retain staff.

Why the pay gap closed

Economists from the London School of Economics have stated that, since the financial crisis, the whole country has seen a strong increase in job creation combined with weaker wage movements. A more extreme version of this trend has occurred in London. 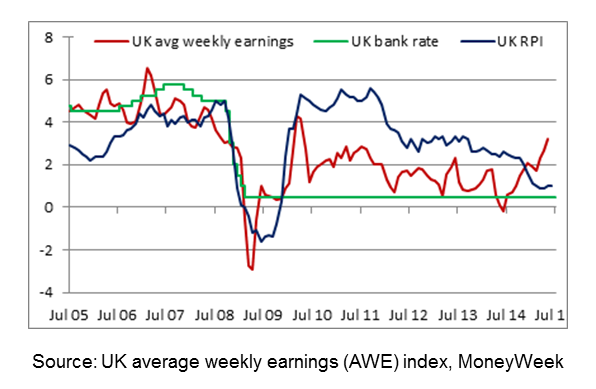 According to data produced in the Annual Survey of Hours and Earnings, and the Labour Force Survey, wages in London remained weak post 2012 despite a period of rapid growth in employment in the capital. In the period between April 2008 and April 2014, annual pay rates rose by just 2.5% for the average worker, but outside of London the figure was closer to 5.9%. It was even as high as 9.9% for those living and working in the North East of England.

Employment rates across the country are almost at an all time high, while at the same time average UK wages fell by around 8% in real terms. This was the story coming out of the financial crisis and only began reversing in late 2014.

It can be explained in part by the radical effects of the recession on the flexibility of the economy, and would be expected to show up more obviously in London because the city has the largest private sector in the country.

The steady rise in lower paid jobs has also had a knock on effect within the higher paid roles of supervisors and managers, because lower-paid people were increasingly moving into these roles without seeing a significant increase in their salaries.

More traditional high-end jobs also didn’t witness a rise in average pay rates because these positions were filled with either less experienced staff, or people willing to accept lower pay for these roles.

While wages have declined in real terms London house prices have increased 4% in the last year alone. According to the Financial Times in their article, priced-out workers forced into long commute, this means you now need an annual salary of £77,000 to afford property in the capital. Unfortunately London salaries are on average significantly lower at £34,320!

A chronic shortage of properties combined with high rent and/or mortgage costs have made it almost impossible for most people to live in the capital, especially if they’re looking to start a family with all the additional associated costs of raising children. It's been a particular problem for millennials and those aged in the 35-40 bracket.

When looking at the steep price differences between properties in London compared to the regions, it's clear why many workers have moved to more affordable areas outside of the city and now commute the significant distances in.

What may happen as a result of this is that house prices adjust accordingly in the regions, but at a much slower rate than has been witnessed within London. While the over-inflated prices of the London housing market make homes away from the bright lights seem more attractive, we are now seeing other regions outside of the capital going through a period of regeneration resulting in higher property prices, better infrastructure, and improved national and global networking capabilities.

Where are London workers moving to?

A report from the Office for National Statistics (ONS) confirms that a new breed of economic exiles are choosing to leave the city in favour of a life in the country. This covers many destinations, some of which include:


Areas such as these could swell because it is predicted that over the next decade we will see more than half a million people leave the city. Workers have been priced out of London and their prime goal is to pursue a better quality of life elsewhere.

In many ways cloud computing and the rise in contractor numbers combined with increasingly flexible working hours/practices, have made the possibility of commuting eminently more feasible. Working remotely and from several different locations has become both an option and reality for many of today’s workforce participants.

There are more employees than ever before based outside of London who commute infrequently to the capital to touch base with a central office. A record number of 30-39 year olds left London (58,220 to be precise), in the year to June 2013.  This resulted in a net outflow of nearly 22,000 and a 25% increase on 2010, according to the focus on London moves report by the ONS.

This trend could become a problem for the capital’s businesses. Above inflation rail fare increases and a burgeoning business scene in the regions as a result of infrastructure improvements and skilled people migrating out, could tempt many to ditch working in London altogether. Why endure the duress of the daily commute, if you can perform equally challenging work locally at a competitive wage while saving on the train fare?

That’s a potentially disastrous scenario for many of the capital's employers whose companies are heavily reliant on their employees, being predominantly service sector based and knowledge intensive. Consequently it’s never been more important to hold onto talent.

How to keep hold of your best staff

You need to keep your best people because chances are, most of the work your business performs and the relationships you hold with clients/customers are reliant on them in some way. Retaining staff means investing in them. Whatever form that takes, the likelihood is they’ll recognise and appreciate your efforts to help them upskill.

So, consider implementing the following initiatives with your employees and the chances are they will look on you and your company from an enhanced and increasingly loyal perspective: