How well are HMRC doing in light of the HSBC tax avoidance scandal?

In a previous post we examined why now more than ever, you need to fill in your tax return accurately. To recap, this was due to technological developments that have armed HMRC with new tools and far greater insight into people’s lives. The revenue's additional sector-specific campaigns means you would expect an increase in successful investigations resulting in taxes that had been avoided going to the government’s coffers.

Unfortunately some of the headlines from the media such as the Panorama documentary on how HSBC helped its clients dodge tax, paint a somewhat different picture. The suggestion being that tax avoidance has been rife and those caught out have been treated leniently.

What’s really going on here, has all the money spent on new IT systems gone to waste? How well are HMRC actually doing in helping the government tackle the deficit and what does this mean for you and your business?

Examining the nation’s finances would seem a good starting place to understand how tax collection is progressing. This doesn’t paint a particularly good picture for the revenue in terms of income or the government in relation to spending. Firstly, the national debt (the total that the UK owes its creditors) stands at £1.4tn. This has increased by £445.8bn in the last 5 years, that’s up 47% in this parliament alone, as you can see from the graph below (courtesy of the Telegraph’s analysis of Britain’s debt mountain). 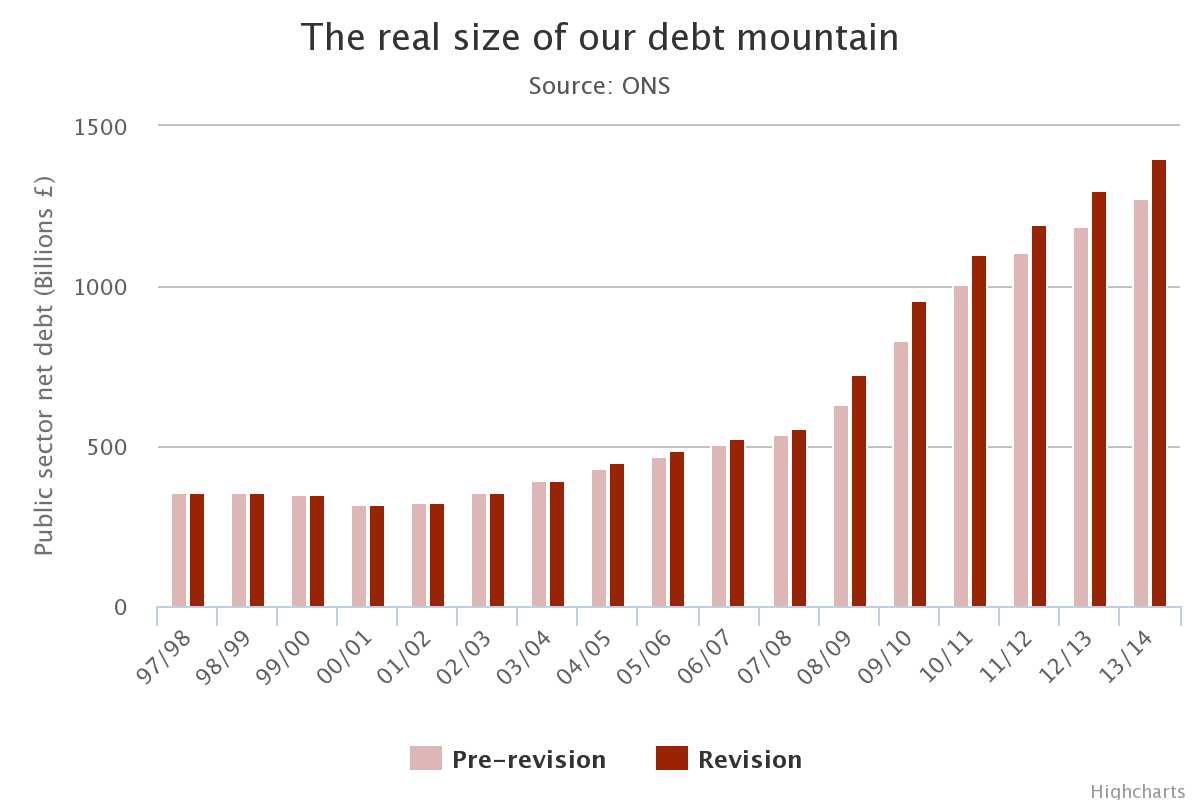 The reason the debt pile has increased so much is because, whilst the national deficit (the government’s annual expenditure compared to its tax revenue – "the overspend") has improved by £51.8bn from 2010-2013, the government are still falling short of their goals at this stage in their term. It remains higher than what was expected with £51.2bn still to be cut from public spending. So what is the reason for this? 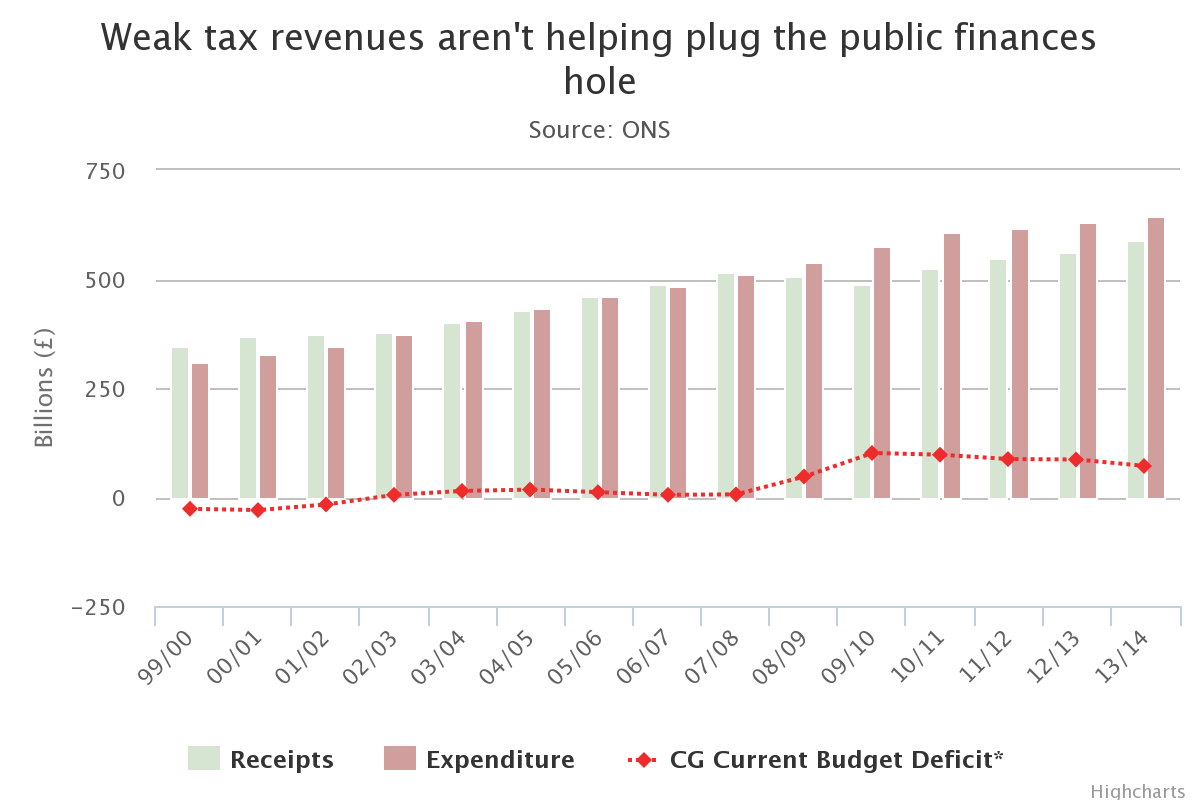 Why are HMRC struggling to improve the amount of tax collected?

The problem comes down to the tax take or, in this instance, the lack of it. It makes grim reading for HMRC and could raise questions over whether the government is recouping on its technology driven expenditure. Analysing income tax, capital gains tax and National Insurance Contributions (NICs) reveals that their combined contribution to the total tax take has not improved in the last 3 years. 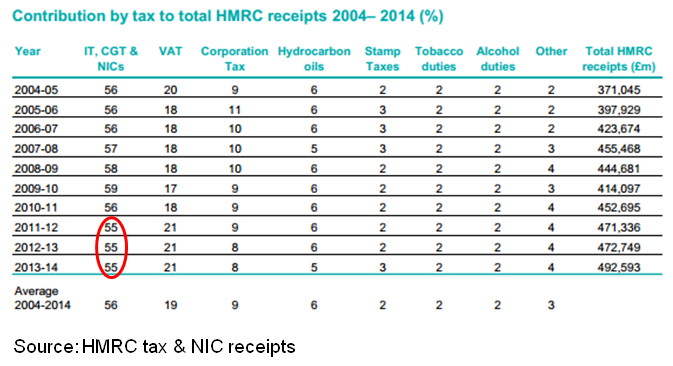 Why have tax receipts been lower than forecast? A prominent reason is the lack of real wage growth since the economic crash has hit the tax intake dramatically. This trend has only shown signs of change in recent months with the collapse in oil prices and the drop in inflation.

Whilst there has been job growth in the last two years, much of this has been at the lower end of the pay scale. It’s led economists to explain that Britain has been undergoing a “jobs rich, but tax poor” recovery. This wage trend has only recently shown signs of upward change. Furthermore, rumours of HMRC being understaffed and criticisms of its culture, may make the recovery fall short of the targets the Treasury was originally aiming for.

The consequences of anaemic wage growth

Perhaps HMRC’s biggest problem has been income tax receipts when it comes to improving the tax take. Unfortunately this is largely beyond their control. That’s because there have been more low wage workers entering the workforce earning the new tax free allowance of £10k before they have to start paying income tax.

Sluggish wage growth has resulted in fewer than expected numbers of workers moving up into higher income tax bands, known as fiscal drag. In fact, movements may have been more in the opposite direction. These represent significant social and economic trends that the next government will have to work closely with the business community to solve.

What about tax avoidance?

Research commissioned by the Public and Commercial Services Union estimates that on average, tax dodgers costs the economy £19.1bn a year.  HMRC surmises that over £22.3bn was lost in 2013-2014 to tax evasion, however this figure clashes with the Public and Commercial Services Union research who have deduced the cost for that year at £73.4bn. Their prediction is this will increase to £100bn for the 2018-2019 tax year should things not improve before then.

With estimations like this, you can see why tax and specifically dodging tax is a hot topic going into the general election. The HSBC scandal has further heightened the avoiding tax fever when it was revealed the bank helped several thousand customers store $21.7bn in Swiss accounts to conceal assets and evade the authorities. It should be noted, however, that avoiding tax doesn’t necessarily imply breaking the law rather a moral obligation to pay a fair share.

In that sense many (but not all) of the bank’s British customers cited in the BBC documentary may not have done anything legally wrong. Furthermore the government’s investment in increasing HMRC’s powers was designed to tackle this specific problem head on – the HSBC scandal relates largely to activities prior to 2010.

So is the clamp down on tax avoidance actually working? The case for...

The figures at first glance would suggest that it is. There has been a 39% increase in money collected from investigations into self assessment tax payers from 2012/13 (£609m) to 2013/14 (£845m). Since 2007 the amount had risen year on year but from 2012 it nearly doubled. The increase, we would presume, is applicable to the new processes and campaigns put in place. It seems that the more targeted approach towards specific sectors has also contributed.

The extra revenue recouped from doctors, electricians and plumbers alone ran to £100m in the last tax year. The introduction of the ‘Affluent Unit’ in 2011 led to a recovery increase of 60% from £85.7m to £137.2m. Of note this particular unit covers UK residents on annual incomes of £150k and above. HMRC exceeded targets for additional revenue in 2013/14 with a record breaking £23.9bn in compliance income. Currently they are on track to meet their 2014/15 goal.

Significant criticisms of HMRC! The case against...

When looking at these numbers we need to consider context. Some of the problem may lie in the estimations of dodging tax and what actually ended up being recouped. The Treasury expected to bring in £3.2bn from an assault on Swiss-based accounts and this was factored into the spending plans back in 2013.

British residents with Swiss assets were hit with a one-off levy of between 21% and 41% but the campaign brought in just £440m. Furthermore Switzerland warned the Treasury it would not raise as much as hoped because most British-based accounts were held by non-doms, who could navigate around the rules.

Recent broadcasts on the BBC Radio 4 Today programme have highlighted the public feeling that HMRC pursues early stage businesses and the little man aggressively over small sums yet comes to “sweetheart deals” with corporates over vast sums of tax potentially outstanding.

Back in November 2010 the revenue struck up one of these tax deals with Goldman Sachs whereby the bank escaped paying up to £20m in interest owed. This was criticised subsequently by a judge in court for being conducted behind closed doors and without proper approval or reference to lawyers. Another deal with Vodafone is said to have resulted in HMRC waiving a potential tax bill worth £7bn.

Only recently Margaret Hodge MP who chairs The Public Accounts Committee cited the tax man as being far too keen to chase small businesses but not doing enough to prosecute multinational firms. She also referenced the Tax Gap (the theoretical amount that isn’t collected but should be) as increasing by £1bn in 2011/12 to £35bn.

This £35bn that she refers to in the video was subsequetly revised down by HMRC in October 2014 to £33bn due to "improvments in reporting and updated data". Regardless, government accounts drawn up by the Treasury have also revealed that, in 2011/12 tax year, around £13.2bn was written off because of fraud and error.

To return to the HSBC scandal, the focus has ended up at the Revenue’s doorstep. Significant criticism has been levied that having identified 1,100 potential tax evaders from a list of 7,000 British clients, HMRC was not aggressive enough in its response. Whilst £135m in tax, interest and penalties was paid by those who hid their assets in Switzerland, only one person was prosecuted.

Criminal prosecutions may be difficult and time consuming as establishing a case of deliberate deception as opposed to honest error can be a complex matter. However, reports from this episode point to criminal activity. Successful prosecutions would therefore lay a clear marker down to other would-be offenders. In the long run that could have a greater impact in terms of preventing avoidance as opposed to the effort of recouping money from such a sorry affair as this.

What all of this means for you & what you should do?

The media frenzy over tax dodging has become a recurring theme. From Gary Lineker to Jimmy Carr and Richard Caring (to name just a few), celebrities and high profile business people have been cited and embarrassed for the measures they are willing to take to reduce their tax bill. The emphasis of the argument has shifted from a legal and tax evasion one to a moral agenda that revolves around avoidance and ensuring people pay their fair share.

Whilst the intricacies of this could be long debated it can’t hide away from what is a very clear picture. The government needs to cut the deficit and improving the annual tax take will be a significant part of this moving forward.

The days of hiding millions away from the taxman in a secret Swiss bank account are gradually coming to an end. This may not be progressing as quickly as some MPs and the Public Accounts Committee would like, but there is clear evidence of progress. The taxman has vast new powers; not just to investigate your finances, but also to extract money from your bank account in the event of a tax debt of over £1,000.

It has never been more important to plan your affairs accordingly, ensuring all your income streams are identified while avoiding any aggressive tax avoidance schemes. Failure to do so could likely prove expensive and after recent headlines even result in prosecution. Remember, any tax payer who submits a tax return can be scrutinised whether they are fully compliant or not!

The number of enquiries is only likely to increase. Therefore another sensible course of action would be to take out fee protection insurance. This is because the average fees for dealing with a tax enquiry amount to £2,500. Signing up to insurance that covers this in the event of an investigation ensures the availability of your accountant to work for as long as it takes to resolve your case (subject to your policy limit) at a significantly lower cost to you and/or your business.